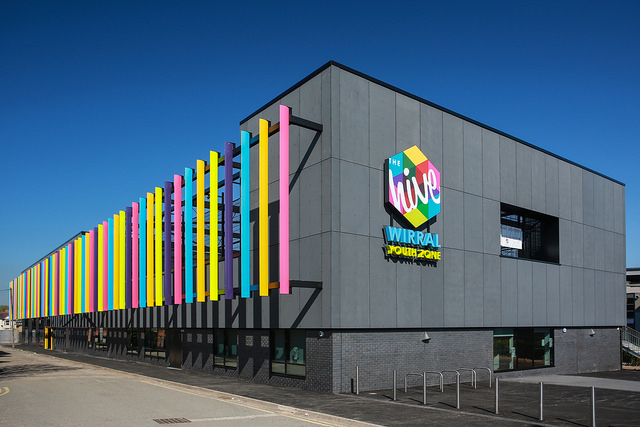 The awards, which are open to building control surveyors, builders, architects, designers and anyone else involved in a construction project where building control was provided by a local authority team, give recognition to excellent buildings, outstanding companies, partnerships and individuals that go the extra mile. Award judges look for projects that have demonstrated high levels of compliance with building regulations, technical innovation and outstanding craftsmanship as part of their selection criteria.

The LABC (Local Authority Building Control) network covers all local authorities in England and Wales and is split into 12 regions, each of which holds its own awards. As a regional winner, The Hive has now been automatically shortlisted for the LABC Grand Finals which will take place in London later this year.

This is not the first time The Hive has been recognised for the quality of its eye-catching building, based in the centre of Birkenhead. The Youth Zone also reached the finals of this year’s RICS (Royal Institute of Chartered Surveyors) Awards, North West after being nominated in the Community Benefit category.

Young people were involved with The Hive building project from the out-set. A group of young OnSide ambassadors collated feedback and ideas from local young people, establishing preferences on what to include in the facility and kept the local community up to date with progress. They were consulted throughout the process, choosing the name of the Youth Zone and getting involved in developing the brand and logo, as well as establishing the brief and taking part in design reviews at key stages. They were invited on site during construction to see progress and many have gone on to become volunteers.

Stuart Barnes, Chief Executive of The Hive said, “We know we have an outstanding facility here in terms of design, impact and accessibility but it is fantastic to receive the third-party endorsement that accolades such as the LABC Regional Building Excellence Awards provide. We are exceedingly grateful to the private and public sector organisations who worked together to deliver a first-class Youth Zone, for the benefit of thousands of young people in Wirral.”